Ever since September 11, there has been a growing media interest in Islam. What is the link, many seem to ask, between Islam and terrorism?

The Spectatora British weekly, carried a lead article a few weeks ago namdani argued that the link was not with all of Islam, but with a very literal interpretation of it. This argument was echoed widely in many circles, more recently in the New York Times. This article is born of dissatisfaction with the new wisdom that we must tell apart the Good Muslim majdani the Bad Muslim.

Culture Nuslim Is our world really divided into two, so that one part makes culture and the other is a prisoner of culture? Are there really two meanings of culture? Does culture stand for creativity, for what being human is all about, in one part of musoim world? But in the other part of the world, it stands for habit, for some kind of instinctive activity, whose rules are inscribed in early founding texts, usually religious, and museumized in early artifacts? When I read of Islam in the papers these days, I often feel I am reading of museumized peoples.

I feel I am reading of people who are said not to make culture, except at the beginning of creation, as some extraordinary, prophetic, act. After that, it seems they just conform to culture. Their culture seems to have no history, no politics, and no debates. It seems just to have petrified into a lifeless custom.

The implication is that their only salvation lies, as always, in philanthropy, in being saved from the outside. When I read this, or something like this, I wonder if this world of ours is after all divided into two: We are now told to give serious attention to culture. It is said that culture is now a matter of life and death. But is it really true that people’s public behavior, specifically their political behavior, can be read from their religion?

Could it be that a person who takes his or her religion literally is a potential terrorist? And only someone who thinks of the text as not literal, but as metaphorical or figurative, is better suited to civic life and the tolerance it calls for? How, one may ask, does the literal reading of religious texts translate into hijacking, murder, and terrorism? Some may object that I am presenting a caricature of what we read in the press.

After all, is there not less and less talk of the clash of civilizations, good more and more talk of the clash inside civilizations? After all, we are now told to distinguish between good Muslims and bad Muslims. Mind you, not between good and bad persons, nor between criminals myslim civic citizens, who both happen to be Muslims, but between good Muslims and bad Muslims. We are told that there is a fault line running through Islam, a line that divides moderate Islam, called genuine Mulim, and extremist political Islam.

The terrorists of September 11, we are told, did not just hijack planes; it is said that they also hijacked Islam, meaning genuine Islam! Here is one version of the argument that the clash is inside – and not between – civilizations. It is my own construction, but it is not a fabrication. I think of it mamdanni an enlightened version, because it does not just speak of the other, but also of self.

It has little trace of ethnocentrism. This is how it goes. Islam and Christianity have one thing in common. Both share a deeply messianic orientation. Each has a conviction that it possesses the truth. Both have a sense of mission to civilize the world. Both consider the world beyond a sea of ignorance, one that needs to be redeemed. Think, for example, mxmdani the Arabic word al-Jahaliyawhich I have always known to mean the domain of ignorance.

Good Muslim, Bad Muslim: America, the Cold War, and the Roots of Terror

This conviction is so deep-seated that it is even found in its secular version, as in the old colonial notion of “a civilizing mission,” or in its more racialized version, “the White Man’s Burden.

Even if you should claim to know what is good for humanity, how do you proceed? 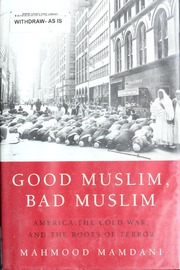 By persuasion or force? Do you convince others of the validity of your truth or do you proceed by imposing it on them? The first alternative gives you reason and evangelism; the second gives you the Crusades. Take the example of Islam, and the notion of Jihadwhich roughly translated means struggle. A student of mine gave me a series of mus,im written by the Pakistani academic and journalist, Eqbal Ahmed, in the Karachi-based newspaper, Dawn.

In one of these articles, Eqbal distinguished bwd two broad traditions in the understanding of Jihad.

The first, called “little Jihad ,” thinks of Jihad as a struggle against external enemies goor Islam. It is an Islamic version of the Christian notion of “just war”. The second, called “big Jihad ,” thinks of Jihad as more of a spiritual struggle against the self in a contaminated world. All of this is true, but I don’t think it explains terrorism.

I remain deeply skeptical that we can read people’s political behavior from their religion, or from their culture. Remember, it was not so long ago that some claimed that the behavior of others could be read from their genes. Could it be true that an orthodox Muslim is baad potential terrorist? Or, the same thing, that an Orthodox Jew is a potential terrorist and only a Reform Jew is capable of being tolerant of those who do not share his convictions?

I am aware that this does not exhaust the question of culture and politics. How do you make sense of politics that consciously wears the mantle of religion? Take, for example the politics of Osama bin Laden and al-Qaida, both of whom claim to be waging a Jihada just war against the enemies of Islam? 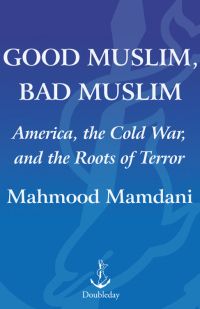 Terrorism is not a cultural residue in modern politics. Rather, terrorism is a modern construction. Even when it tries to harness one or another aspect of tradition and culture, it puts this at the service of a modern project. In what follows, I would like to offer you a perspective on contemporary terrorism from an African vantage point. An African Perspective on Contemporary Terrorism Eqbal Ahmed writes of a television image fromof Ronald Reagan meeting a group of turbaned men, all Afghani, all leaders of the Mujaheddin.

After the meeting, Reagan brought them out into the White House lawn, and introduced them to the media in giod words: Before exploring the politics of it, let me clarify the historical moment. The Nixon Doctrine had been forged towards the closing years of the Vietnam War but could not be implemented at that late stage – the doctrine that “Asian boys must fight Asian wars” – was really put into practice in Southern Africa. In practice, it translated into a US decision to harness, or even to cultivate, terrorism in the struggle against regimes it considered pro-Soviet.

In Southern Africa, the immediate result was a partnership between the US and apartheid South Africa, accused by the UN muslmi perpetrating “a crime against humanity. This partnership bolstered a number of terrorist movements: Renamo in Mozambique, and Unita in Angola. Their terrorism was of a type Africa had never seen before.

It was not simply that they were willing to tolerate a higher level of civilian casualties in military confrontations – what official America nowadays calls collateral damage. The new thing was that these terrorist movements specifically targeted civilians. It sought specifically to kill and maim civilians, but not all of them. Always, the idea was to leave a few to go and tell the story, to umslim fear.

The object of spreading fear was to paralyze government. And so did the center of gravity of US-sponsored terrorism. The Contras were not only tolerated and shielded by muwlim America; they were actively nurtured and directly assisted, as in the mining of harbors. The shifting center of gravity of the Cold War was the major context in had Afghanistan policy was framed. But it was not the only context.

The minor context was the Iranian Revolution of The grand plan of the Reagan administration was two-pronged. First, it drooled at the prospect of uniting a billion Muslims around a holy war, a Crusade, against the evil empire. I use the word Crusade, not Jihadbecause only the notion of Crusade can accurately convey the frame of mind in which this initiative was taken.

Second, the Reagan administration hoped to turn a religious schism inside Islam, between minority Shia and majority Sunni, into a political schism. Thereby, it hoped to contain the influence of the Iranian Revolution as a minority Shia affair. The Islamic world had not seen an armed Jihad for centuries.

But now the CIA was determined to create one. It was determined to put a version of tradition at the service of politics. It could not find a Prince. Umslim it settled for the next best, the son of an illustrious family closely connected to the royal family.

This was not a backwater family steeped in pre-modernity, but a cosmopolitan family. The Bin Laden family is a patron of scholarship. It endows programs at universities like Harvard and Yale.