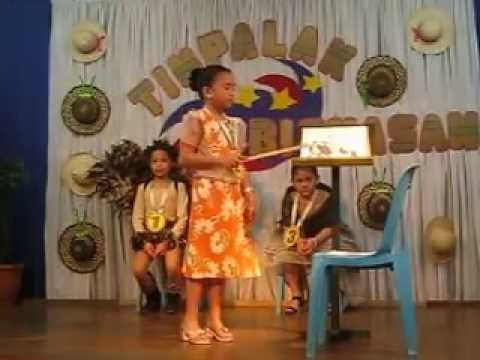 This old fable, as retold by Victoria Anonuevo and illustrated by Virgilio Almario in Isang Mayang Uhaw published by Adarna House, is about a clever sparrow who came up with a solution to his problem.

How can a small sparrow quench his thirst after four bigger birds get their fill and leave him with a nearly empty glass? The clever sparrow dropped some pebbles into the glass to make the water rise. isanh She would gingerly plop ice cubes one at a time and laugh in delight as the water rose. With this book, we practiced isadalawatatloapatat lima as we counted the birds and the pebbles in the story. Little Ksang got interested enough to learn how to count up to dalawampu!

Little T and I spent precious quiet moments appreciating, watching, and listening to the birds flying around the garden. Being with nature is something that I want to have more in our daily life, and we are blessed to only have to open the backyard door to do it. We attracted some birds with osang bird-feeder we made from a discarded book box, but the airborne creatures are isanf too quick for my camera.

We also spent one morning painting outside.

We followed a tutorial on Wet on Wet Painting that is popular with Waldorf families. I told Little T that we were going to paint about birds isqng gave her some key words to guide her: The objective was not to draw birds, but to feel how it is like to be a bird.

I try to incorporate some time in the kitchen every week, and would love to have Wednesdays as our regular cooking or baking day. This activity, as usual, worked on several levels:. Unlike children being herded to school stages to perform, Little T makes the world her stage.

I still have a lot of ideas and I would love to go to the zoo to visit the hawk, hornbill, egret, and rail featured in the book. We can always pick it up again for another round of natural learning. For now, I am perfectly satisfied that my child is learning just by watching birds at the backyard, baking, painting, and dancing like a bird. Mariel is a homeschooling mom of three, editor of and speaker at The Learning Basket, a U. Little Hands at Work.